This weekend, some anonymous activists posed as representatives of Canadian engineering megafirm SNC Lavalin and the World Bank, passing out pamphlets like these, and promoting internships and employment opportunities. Most of their target audience were students from McGill (arguably among Canada's most prestigious and empire-oriented universities), specifically MBA students who were attending a conference featuring speakers from the World Bank, SNC Lavalin, and Alcan, among others. The theatrical intervention, which contrasted/complemented the more traditional protest denouncing the World Bank, was a success, or so I hear. 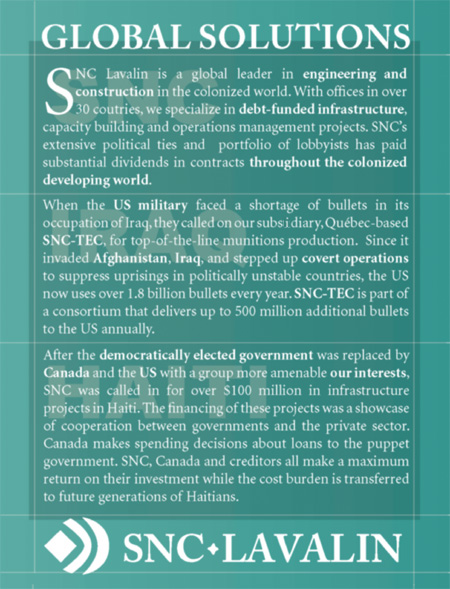 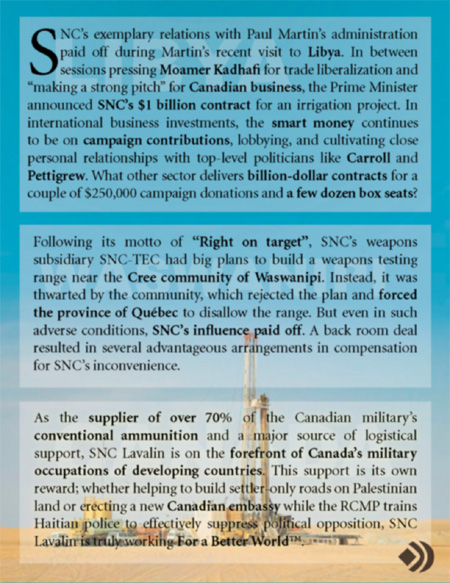 posted by dru in activism
# Ford on the net

Paul Ford: "This is not to condemn blogs. They are often great. But there are so many of them, and I will be dead for a long, long time. And on my deathbed do I want to say, I sipped mightily of Metafilter, and saw many video clips that made fun of Rosie O'Donnell, and I am richer for it? Or should I try to make contact with the culture that existed before 1992? The Internet makes it so easy to think that nothing of importance ever took place before the ARPANET was created."

Incidentally, Paul's novel is out. Congrats.

posted by dru in politicsoftech