misnomer
If I can't misquote, it's not my revolution 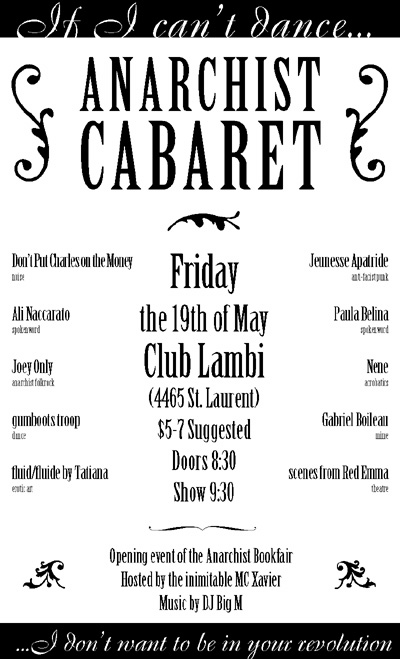 While working on the above poster for the Anarchist [Bookfair] Cabaret, I came across this bit of feminist errata. As it turns out, Emma Goldman never actually said the words most famously attributed to her: "If I can't dance, I don't want to be in your revolution". The link tells the story of how the version entered circulation.

I searched Emma's texts for the statement; it was nowhere to be found. But Jack was so pleased, the festival was so soon, Emma looked so lively printed in red and black on a variety of rich background colors, that I hadn't the heart to register an objection in the name of scholarship. After all, the apocrypha appeared on a mere gross or two of T-shirts, which surely could not require the same standards of accuracy as, say, book blurbs extracted from book reviews--and the sentiment expressed was pure Emma indeed.

But history (and fashion) exploded so quickly in those hungrily feminist days that the slogan on the original shirt-run was soon dispersed and copied and broadcast nationwide and abroad, underground and above, sometimes, absent a text to be checked against, changing along the way like a child's game of Telephone, until Jack's initial lighthearted liberties had taken wing as quotable lore and soared up into the realms of myth.

When all my shirts from the original batch had been given away to friends and my own worn to a rag, I decided to buy another. Only the new shirt, purchased in an uptown bookstore, sported a different picture of Emma--this time in a floppy hat--and a different version of the by now legendary legend, different still from the one I sometimes flaunt on a button. But, hey, if you can't wear what you like, who wants to be in your revolution?

posted by dru in activism