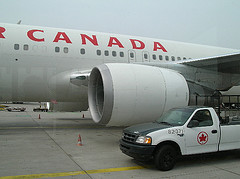 I met an Egyptian guy, Ahmed, on the Toronto-Frankfurt flight. He's a pilot in Egypt, and was in Canada for a week of flight simulator training. He didn't like Canada, though. Beautiful country, he said, but everything is expensive and people are busy; they don't have any time, he said. If he worked in Canada, he would make 20 times what he makes in Egypt, but he didn't want to do it. People are more relaxed in the middle east in general, according to him. You work, you don't work; you still live. The exceptions are Lebanon and Dubai, which are more European. People have less time there.

(And the women in Canada, he said, you can't talk to them. They might sue you. In Egypt, you talk to women, it's ok. As long as you don't touch them, everything else is fine.)

He's been all over the Middle East, but never to Iraq or Israel. He said there's too much paperwork. His colleagues flew to Israel, but they are intensively interviewed by the authorities. Why do you go to Tel-Aviv? What are you doing here?

He said rules are very relaxed in Egypt. You can drive straight ahead--he made a chopping motion with his hand--or you can go like this--he made a broad swerving motion. If the police catch you, you say "I'm sorry, brother, I won't do it again." And the police will point to the rules and tell you not to do it again. Then you're on your way.

I asked him about political freedom. He said it's ok to say "fuck the government" in Egypt, but you're not allowed to say anything bad about the President, at least until recently. It's more or less the same everywhere in the Middle East where he's travelled, he says. Saudi Arabia is loosening up a bit because of tourism, but everything happens underground. Shopping, drugs, alcohol. Life in Iraq was very hard, even before the war. Syria--he rolls his eyes--in Syria you don't criticize the government. In Jordan, everyone loves the King. Everything he does, they love it. It's true.

He says that Christians in Egypt complain about repression, but he doesn't see how it is happening. Many of them are very rich, he says. I agree that rich people sometimes complain about the limits placed on them. He says the Jews are the same way. They have a state, they are rich. Why are they always complaining? I find myself explaining the history of anti-semitism, not mentioning the Palestinians. He asks if I'm Jewish. But, I add, with Israel it's complicated because now the Jewish state is making people suffer. He says he thinks maybe that's true. Cautiously. But still, he says, they have everything. What is the problem?

We chat a bit more, and the fasten safety belt sign goes on, and we go back to our seats.