misnomer
Red Dawn... so soon after the Pinko Sunset? 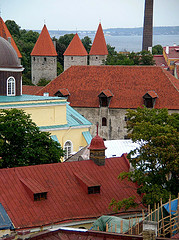 Anyone see the movie Red Dawn. I actually haven't, but the basic premise is that the Soviet Union invades the US. Which is to say, the film is rightfully the subject of ridicule, and that's before you get to the part where a bunch of high school kids (Patrick Swayze and Charlie Sheen among them) defeat the red army.

But the possibility of a Russian invasion actually feels real to folks in Estonia, and it seems to be not quite the paranoid right wing fantasy that it is in the US.

I was reminded of all this when a Russian fighter-bomber mysteriously crashed in Latvia the other day. The same day, a Russian military plane flying through Estonia went off of its flight path and onto a civilian flight corridor (not sure of the terminology in English). Apparently this is just the last in a long string of provocations. The previously favoured method, I hear, was to fly fighters at top speed toward the Estonian border and turn away at the last minute. (In other recent news, Russia withdrew from the treaty it had signed a few months earlier. Negotiations leading up to the signing. Also, check out the selective coverage of the fighter incident in the Russian media.)

As I said before, a key part, if not the defining characteristic of Estonian foreign and domestic policy has been to avoid being conquered (for the nth time) by the Russians. This has been a primary motivation for joining NATO, the EU, the WTO, the IMF sending troops to Iraq (two of whom have been killed) and Afghanistan, giving Bush Sr. some kind of medal yesterday (he promised to mention his kind treatment by the Estonian government to his son), and so on.

Despite all this, uncertainty reigns. A few evenings ago, Lauri and I had a big chat about the state of Estonia and the world. He reckoned that obviously there's no chance that Russia will invade under the current conditions. But over the next fifty years, the EU could very well break up, or who-knows-what could change, and it would be the same thing once again.

While I'm not sure if most or even many people think about an invasion, there's certainly an overwhelming nervousness about what Moscow's got cooking.

Apparently, the Kaitseliit, the National Guard, is trained mostly in guerilla warfare, the idea being that [whoever] can go ahead and invade. If they try to occupy, though, they'll have a rather rough go of it. "A patriot behind every tree," or something like that.

In any case, I can now say firsthand that there's a (big!) difference between fearing a genocidal occupation and fearing a terrorist attack. Score one for basic truths.