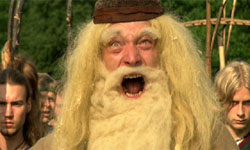 Last week, I went to see Malev, a recent historical epic/parody, and one of the small number of Estonian feature films made each year. It was an interesting combination of Estonian history (covering the first of many attempts to keep conquerors -- this time German crusaders -- from taking over), parody of historical epics like Braveheart, and a parody of the Estonia's own cultural tendencies. The story is the basic tale of European nationhood: assorted tribes and cultural and linguistic sub-groups, normally existing independently, have to unite to face a common foe.

Uru, the main character, is taken away from his homeland at an early age to be whipped, beaten and (literally) shat on by various members of the church hierarchy. It's hard to explain how this is funny. One tangental explanation is that (and this seems to be a tendency in smaller, historically oppressed nations) self-deprecation is a prevailing mode of comedy in Estonia. Years of enslavement, serfdom, and seemingly futile wars of liberation are an integral part of Estonians' historical and cultural identity, so Malev's absurdly (though not unrealistically) exaggerated version of that got some laughs.

Mentored by a member of the Knights Templars (who wants to foil Germany's expansion) in the ways of war, Uru returns to unite his people to fight the invaders. The Estonians, however, ignore him as soon as it's time to sing (an Estonian passtime, to say the least) and party. Lembitu, who is generally thought of as an Estonian hero who led the fight against the invading Germans, is portrayed as being too busy (absurdly) planing large pieces of wood to listen to Uru's warnings.

I mention all of this by way of contrast to epics like Braveheart. We Anglos have the earnestness of Mel Gibson, and we have over the top absurdity of Monty Python and Mel Brooks, but there's not much in between. In Malev, they somehow managed to combine the historical epic (with historical research, costumes, elaborate sets) with the absurdist response to it.

When the German army finally attacks, Uru has the Estonians "hold... hold..." until the Germans run into their secret weapon: wooden rakes which they step on, knocking out the first line. Then the Estos attack.

There were a lot of historical references to Estonian culture that I had no clue about, but that's a sketch from a groggy, half-fluent filmgoer.

There were also some references to the current political situation. At one point, the Estonians sent for help from the Russians. Me anname nendele kartuleid, Lembitu exclaimed, as if stuck by sudden inspiration. We'll give them potatoes. Estonia currently has 40 soldiers in Iraq, which might also be metaphorically considered as a variety of diminuitive tuber.

Estonia also has a history of asking for help from one powerful country to repel an invader, only to have their ally stick around and seize power after helping out.