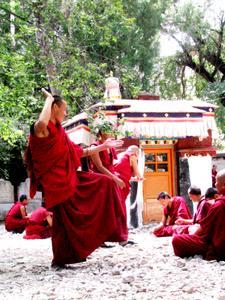 Eva in Tibet: "A highlight for most travellers is arriving between 3 and 5pm, when the monks daily debate. Debate. I had pictured small groups of introspective monks. I approached the courtyard to an orchestra chattering and slapping. Someone was getting a beating. The debate procedure, as it turns out, is to take a text or philosophy (or, as my night students later explained, a simple concept like 'yaks have horns. Those without horns are not yaks.' I don't know how exactly one defends or destroys that statement, but then i'm no philosopher.) and spout it out in a rapid stream of sounds, emphatically punctuated with a slap of the right hand into the left. Before the slap and during the babble, the debater winds up like a baseball pitcher, one knee bent and leg high up until he marks his point by stepping forward and slapping (again, the hand)."

posted by dru in culture