misnomer
The Battle for Hearts and Minds 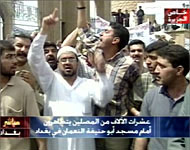 Radio Australia: "In the biggest protest since U.S. forces toppled Saddam Hussein's regime nine days ago, Muslims poured out of mosques and into the streets calling for an Islamic state to be established."

Channel News Asia: "Thousands of Iraqis, spurred on by stinging anti-US sermons from Muslim clerics, staged anti-American protests in Baghdad on Friday. Eyewitnesses said that some 10,000 to 12,000 angry protesters marched through central Baghdad chanting 'We will not sell out our country' and condemning the US presence in Iraq with signs that read 'No to occupation'."

Washington Times: "Anti-Saddam leader Ahmed Chalabi told reporters in his first public appearance in Baghdad that he is not a candidate to become Iraq's new leader and that he expects an Iraqi interim authority to take over most government functions from the U.S. military in 'a matter of weeks, rather than months.'"

NYTimes: "The Bush administration plans to ask the United Nations to lift international penalties against Iraq in phases, retaining United Nations supervision of Iraq's oil sales for now but transferring other parts of its economy to a new Iraqi authority in coming months, administration officials said today."

Reuters: "Iraq's neighbors, led by Saudi Arabia, told the United States on Saturday to get out of the country as soon as possible and keep its hands off Iraqi oil. As U.S.-led forces struggle to reconnect key services such as water and power, foreign ministers of eight Middle Eastern states said the United States had to restore order and then leave so that Iraqis could form their own government."

SF Chronicle: "With Saddam Hussein's regime gone, Iraq's long-oppressed ethnic Kurds are redrawing the map of Iraqi Kurdistan with a vengeance. With the help of armed Kurdish militias, they are expelling Arabic families from towns and villages where Kurds lived decades ago, before Hussein replaced them with Arabs in his drive to ethnically cleanse northern Iraq."