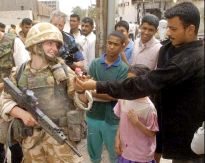 Back to Iraq: "But in a pleasant surprise, on the way back to Arbil, the peshmergas had set up checkpoints and were relieving people of looted material."

Robert Fisk: "Every government ministry in the city has now been denuded of its files, computers, reference books, furnishings and cars. To all this, the Americans have turned a blind eye, indeed stated specifically that they had no intention of preventing the liberation of this property. One can hardly be moralistic about the spoils of Saddams henchmen, but how is the government of Americas so-called 'New Iraq' supposed to operate now that the states property has been so comprehensively looted?"

Ha'aretz: "An Iraqi opposition figure interviewed Wednesday evening by Al Jazeera television said that the symbolism of the smashing of the statue of Saddam Hussein proved 'the Arab regimes... are made of cardboard' and their fate will be the same as that of the Ba'ath regime."

Salon: "The White House calls Afghanistan a success story. But the failure to commit needed resources has left it a chaotic, increasingly dangerous country where violent warlords run amok. Are we going to repeat our mistake in Iraq?"

Guardian: "Yesterday, state department officials moved quickly to undermine Mr Chalabi's efforts by saying that a joint meeting of 'liberated Iraqis' and opposition members from outside Iraq will be held soon, although the date and location have yet to be set. 'It will be our meeting and our guest list, not Chalabi's,' a Bush administration official said." [emphasis added]

Arab News: "Today, there is no possibility that Syria will allow itself to be pushed into a corner in which the survival of its regime will be at stake. Syria knows how not to believe its own incendiary slogans, and how to compromise when it has to."

Al Ahram: "Fears are growing among members of Iraq's opposition in exile over the extent to which the US government will intervene in post-war Iraq to the exclusion of both the Iraqi opposition and the UN."

Al Ahram: "On Monday, a US B-1 bomber dropped four satellite- guided bombs on a civilian area in Baghdad in another attempt by the United States to kill Iraqi President Saddam Hussein."

Al Ahram: "Turkey's erratic foreign policy took another unexpected turn last Sunday when Foreign Minister Abdullah Gul held a meeting in Ankara with his Iranian counterpart Kamal Kharrazi and announced that he would travel to Damascus the following week to establish a regional consultative mechanism between Turkey, Iran and Syria to discuss policy towards Iraq."

Michael Lind: "But the oil business, with its Arabist bias, did not push for this war any more than it supports the Bush administration's close alliance with Ariel Sharon."

Robert Fisk: "Back in 2001, the United States fired a cruise missile at al-Jazeera's office in Kabul  from which tapes of Osama bin Laden had been broadcast around the world. No explanation was ever given for this extraordinary attack on the night before the city's 'liberation'; the Kabul correspondent, Taiseer Alouni, was unhurt. By the strange coincidence of journalism, Mr Alouni was in the Baghdad office yesterday to endure the USAF's second attack on al-Jazeera."

Paul Krugman: "I've been getting a number of emails from people suggesting to me that this impending war is all about money - specifically, to ensure that the dollar, and not the euro, remains the world's #1 currency. The idea is that the US economy will be in danger if OPEC members start demanding payment in euros rather than dollars. With respect to my correspondents, this isn't a plausible argument."